We have gathered at 3rd and Madison with other spiritual and religious groups—the keepers of the faith — near the middle of the people marching. I’m very impressed how this march has been organized. There are people holding pennants for each religion: Catholic, Jewish, Quaker, Islam, Mennonite, Unitarian, Presbyterian, Episcopal, Pagan, and on and on. I meet up with others from JCAN and we unfurl our 10-foot blue banner with its message “See to it that you do not spoil and destroy My world; for if you do, there will be no one else to repair it.” Lots of people take pictures of it. There is a small stage set up in front of us and people are performing message songs and chants in many languages with the same thought: we have to rise up peacefully and be focused on our goal. 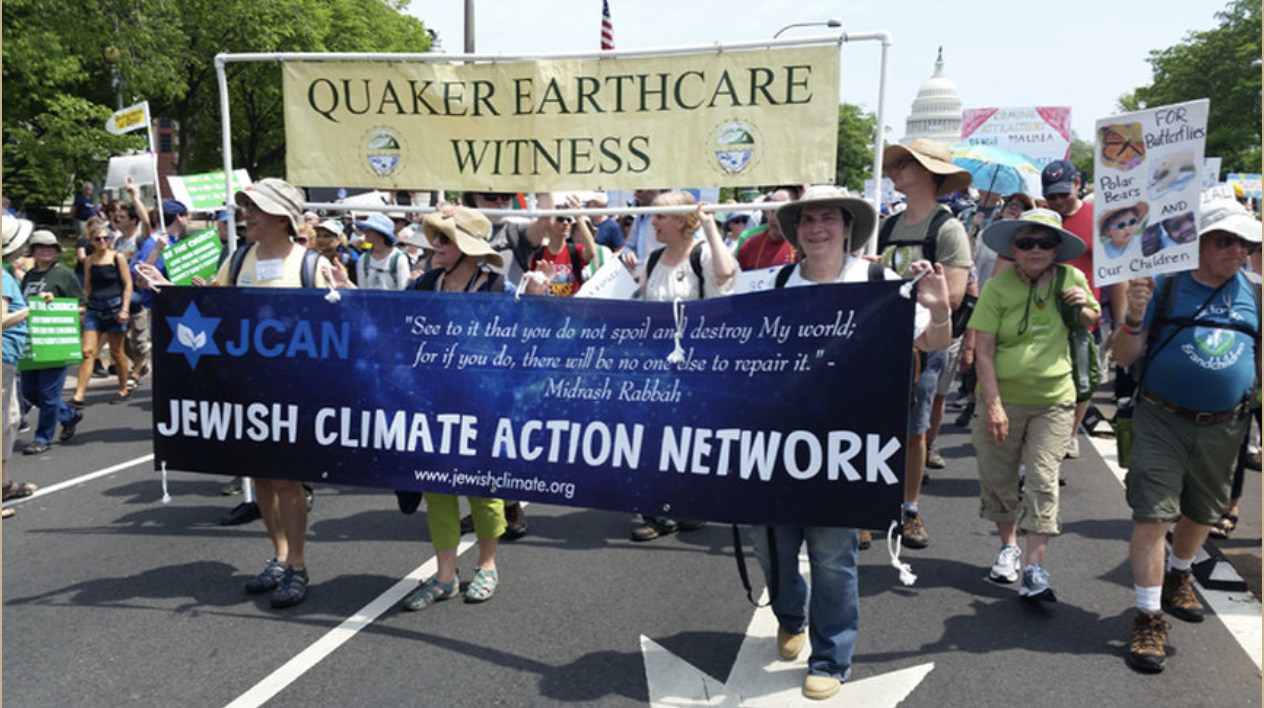 At 12:30, the march begins. It is above 90 degrees. I am meeting so many people from all over the country: 5 busloads came from Minnesota, and many others from Vermont, New York, Iowa, Ohio. I am struck by how multi-generational the marchers are. There are kids, teens, young adults, elders. A woman with purple hair. A boy on a skateboard. A young woman on stilts. Everyone has signs. I talk to a woman from the EPA. She said she is having a positive experience at the EPA right now, that they were going to a food conference.  I am glad to hear this. Then she asks me what 350.org is. I’m shocked she doesn’t know, but this is the problem: we are all in our own worlds, focused on what we know, see, and care about. 350 is a number, the amount of carbon dioxide in the atmosphere (350 parts per million). it is also a threshold that scientists believe is a dangerous one to cross. We are over 400 ppm now. The seas are rising. Some people hold signs showing Mar-a-Lago underwater. Is that what it will take to get Trump’s attention? His hotel underwater? Are climate change deniers really deniers or are they taking a premeditated stance that will bring them more money? I recently read that there is a booming market for upscale multimillion dollar underground bunkers. Rich “climate change deniers” can have it both ways: get rid of regulations in order to make more money, while building a mansion of a bunker to live in when the environment hits the rails and when resource wars ramp up.

As we pass the Trump Hotel, we all start yelling, “Shame, shame.” There are loud boos. Someone hands me a ribbon and asks me to write down what I don’t want to lose due to climate change. I write, “I don’t want to lose my family and friends.” We are to tie the ribbons on a fence at the end of the march. 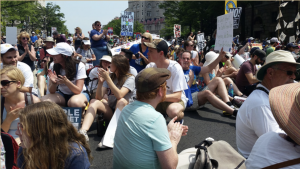 The signs hold the truths:

After the march is over, I’m lying on the grass near the Washington Monument. There are native American dancers nearby, gathered under 2 huge totems. I feel the chanting in my bones. I am tired. People are trying to soak up the shade for a bit of relief from the hot sun. It was a long day. Besides the aching, I can feel the camaraderie. We are making a statement. We know at some level Trump doesn’t care, he’s most likely not even in town to see or hear us. It was Gandhi in 1925 who talked about seven social sins and predicted this is where we would be heading if we don’t wake up. I think the worst of the sins are what we are resisting: commerce without morality, politics without principles, wealth without work. The marches are fun, experiencing one voice with hundreds of thousands of others is energizing. Will it wake anyone up? These are climate actions, but some people really, really need climate justice. On Sunday, I will be going to my Anti-Racism meeting to continue talking about the white problem. Afterwards, I’ll be joining into our local huddle that began after the Women’s March in January; there, we’ll learn how to tweet storm for the environment. Bit by bit, groups are forming, people are changing. Will it be enough before the resource wars begin in earnest and tens of millions are on the move?

Owning my Racism and Advantage On the Bus
More news
X