Letting Go of the Outcome 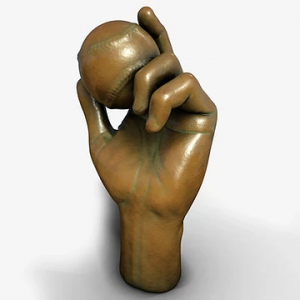 That thing is the human hand under the control of the human brain. During those 12 years, I learned everything I could about the hand and the brain: its evolution, its anatomy and physiology, its capabilities and limitations. I learned how it grasps.

The human hand evolved over a fifty-five-million-year journey. As our ancestral species was forced into the arboreal life of the rainforest and then out onto the savannas of Africa, the appendage changed: fingers became differentiated and they filled with sensory receptors and small muscles. And the thumb shifted into a position of opposition with the other fingers. What emerged was the precision grip, an exquisitely crafted tool for fine manipulation. Picking up coins, turning a small screwdriver, holding a teacup—these actions all use the precision grip.

The evolution of the hand was a journey that was driven by survival and by questions without answers. Where the journey ended, if it is even indeed the end, was not part of the original goal.

And after millions of years of being on a journey, something happened 5,000 years ago. Human society had become complex enough to need record keeping. And someone, somehow, picked up a half-bent reed in their precision grip and drove the reed into a mass of wet clay, marking the exchange of goats for round tokens, or sheep for bags of grain. The precision grip probably formed for social grooming to hold the tribe together, but the skill of the precision grip and a need for a precision grip coalesced into the foundation for all of written history. And into creating everything else like buildings and books, pianos and computers. Even Beethoven’s Fifth.

To me, the birth of writing is a metaphor for living. We never know where a journey will end. It’s only important to do the work of the journey, without expectations. I’ve learned to stay in my heart and do what I love. I can plan, but I need to let go of the results. Where the journey will take me has more possibilities than my own limited mind can see.

To let go doesn’t mean to stop caring: it means I can’t do it for someone else.

To let go is not to cut myself off; it is the realization that I can’t control another.

To let go is not to enable, but to allow learning from natural consequences. To let go is to admit powerlessness, which means the outcome is not in my hands.

To let go is not to try to change or blame another;

I can only change myself.

To let go is not to judge, but to allow another to be a human being.

To let go is not to deny, but to accept.

To let go is not to nag, scold, or argue, but to search out my own shortcomings and to correct them

To let go is not to adjust everything to my desires, but to take each day as it comes and to cherish the moment.

To let go is to fear less and love more.