Being in the Now 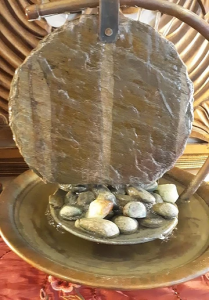 “The more you are focused on time—past and future—the more you miss the Now, the most precious thing there is.” –Eckhart Tolle, The Power of Now: A Guide to Spiritual Enlightenment

I want to share a story. When I was 24 years old and living in New York City, I had a nervous breakdown. Life was not going the way I wanted it to go. it was intolerably painful and I wanted to die. One evening, as I was walking to my college classes, I took a wrong turn and didn’t stop. I just let go of my life. Somehow, I wound up in Staten Island with no memory of how I got there. I was told later I was lying in the snow in the yard of a friend’s house. The next day, a psychiatrist put me on anti-depressants and sleeping pills.

I remember those anti-depressant pills very well. They succeeded in shutting down my ability to feel, and they put me into a state of complete submission. I agreed with what everyone else wanted. I had no desires, no wants. I was like mush. I smiled a lot and so did my friends. They thought my behavior was funny. I didn’t care. I didn’t care about anything. Nothing mattered. I was disconnected from the past and the future.

“All negativity is caused by an accumulation of psychological time and denial of the present. Unease, anxiety, tension, stress, worry – all forms of fear – are caused by too much future, and not enough presence. Guilt, regret, resentment, grievances, sadness, bitterness, and all forms of nonforgiveness are caused by too much past, and not enough presence.” — Eckhart Tolle, The Power of Now: A Guide to Spiritual Enlightenment

I think Eckhart Tolle had a similar thing happen to him when he was 29 years old. But he turned it into something I wasn’t able to. He woke up in the middle of the night with dread and a deep longing for annihilation, like I did. He started shaking. But then he heard the words, “resist nothing.” In the morning and subsequent months, he was in a deep blissful peace. In his reflections, he realized that the intense suffering that night relieved him of his unhappy, deeply fearful self. What was left was his true nature. He had an inner transformation and let go of the noise of his mind.

I do want to be in the Now. I do want to resist nothing. But I don’t ever want to again be in that “mush” state like when I was on those anti-depressants. That is not the Now I want to be in. What is a truly healthy Now? I mean, what is it in real, practical terms? What I’ve learned from Tolle and many other spiritual teachers is this: To have awareness. To let go of fear of the future and the grievances of the past. To strive for serenity. To live in acceptance of outcomes. And to be a loving human being.

Reprinted from my guest blog at www.conqueringyourfears.com/