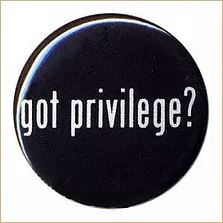 Privilege and Non-privilege: When We Have Both

Calvin Hennick is a white man who has written about the privileges he has in comparison to his biracial son. He lists 7 of the things that give white people privilege (Peggy McIntosh lists dozens more in her white privilege essay). He also lists the other mainstream groups he is part of that receive conferred and unfair benefits (male, Christian, heterosexual). And he points out how discomforting it is to acknowledge being the recipient of such benefits.

How can we as individuals and as a society respond to this accusation? As a woman, I am at a disadvantage to my male counterparts. And yet, I was brought up by a father who believed his four daughters could do anything they wanted. Would my life have been different if I had brothers? When I was old enough, I couldn’t wait to get married because to me that was the sign of being an adult (of course, I didn’t know then that before 1839, married women in this country became dependents on their husband and had no legal rights). And then when I discovered I was gay, that added another disadvantage to my column. So adding it up, I have three non-privileged statuses (female, Jewish, gay) and one privileged status (white). What propelled me through 4 college degrees and any job I wanted? My intelligence and perseverance? Or my being able to hide 2 of my non-privileged states and flaunting my privileged one?

In her TEDx talk, Peggy McIntosh talks about the myth of meritocracy. She talks about being brought up to second guess her colleagues of color without realizing it. As a white person, she thought her colleagues of color just didn’t work as hard as she did. She felt she deserved everything she had created in her life by her hard work. It took her a lot of soul-searching to see her own racism, which she was eventually able to do because she accessed it through her seeing unearned male privilege in action. The word she had to push through was ‘nice.’

I think statistics are the key to seeing where we are going as a society in terms of conferred benefits to groups, but as individuals we should do our own soul-searching to excise how we use and abuse unearned privilege.

What Can We Do About the Patriarchy? Women’s Equality Day 2016 – Patriarchy, Motherhood, and Feminine Ethics