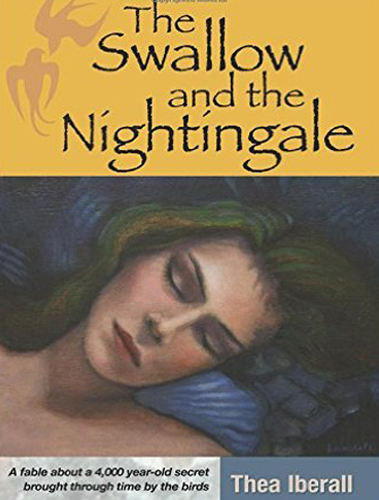 A fable about a 4,000 year old secret brought through time by the birds. Dr. Deborah Wright, an ornithologist from Berkeley, discovers the swallows of San Juan Capistrano are singing a human song! And her daughter makes an impossible request. Against today’s backdrop of environmental decay, Deborah is on a whirlwind journey to heal her family and the world. A 12th century Sufi poet becomes her guide as she realizes the real moral issue of today.

Available in the Massachusetts Library System and at the following bookstores:

EXCERPT from The Swallow and the Nightingale

DR. DEBORAH WRIGHT’S TENSE face glowed in the blue light of her magic machine. The fragrance of sage mixed with the lingering smell of death. She felt like she was listening in on the conversation of gods at the end of all flesh. Touched by the rising sun, pink bougainvillea crept down San Juan Capistrano Mission’s thick adobe walls as water sparkled under lily pads floating in the fountain. The small bodies of cliff swallows lay all around. “That’s really odd,” she said. A slight smile started at the edge of her lips as her hazel eyes widened. “What?” Dr. George Brady slumped in one of the white stone benches surrounded by cacti and white sea lavender. His dark reddish beard made him look like a Pacific Northwest logger. “Listen to this.” Deborah’s voice rose a notch. “Do you hear it?” Deborah’s eyes eagerly searched for confirmation like homing pigeons. “I’m not sure.” Brady sat up. “It sounds like the speed is off." "Here, look at this.” She tore off the paper roll spewing out of the machine. Deborah took a red pen from the case in her jacket pocket. “See, this is the bird’s standard chattering.” She marked the beginning high-pitched churr-churrs and zarp-zarps and then highlighted the next two seconds. “Something here doesn’t belong. It seems more melodic, more”—she paused—“musical.” “And that isn’t normal?” Brady scratched his beard. “No,” Deborah said, shaking and nodding her head at the same time. “It’s almost as if it has a distinct pattern. As if the bird is singing”—she searched for words—“a tune.” “A tune? Don’t all birds sing a tune?” “The bird’s not just making a normal bird vocalization.” Deborah stared at the printout. “It’s singing a human song.”