Thea Iberall has been called ‘a shimmering bridge between heart and mind.’ She’s performed poetry and storytelling since 1998, representing LA at the National Poetry Slams. An inductee into the International Educators Hall of Fame, she is featured in the documentary “Poets, Passion and Poetry.” OC Weekly said Thea “tells narrative stories using simple words that mask hidden layers of meaning and emotion.” The host of Expresso Yourself Coffeehouse, she has performed at Story Space, Limmud, and many venues in Southern California. Her book of contextual poems, The Sanctuary of Artemis, traces the roots of patriarchal domination. Her musical We Did It For You! Women’s Journey Through History tells the story of how women got their rights in America. And her visionary novel The Swallow and the Nightingale is a way to wake people up to the real moral issue of today: not who you love, but what we are doing to the planet. She has a Master’s Degree in Writing and a Ph.D. in Computational Neuroscience.

Dr. Thea Iberall is an award-winning writer, storyteller, and scientist. She crosses boundaries between science and the arts, history and the present, and knowledge and emotion. The author of three scientific texts, she has a Ph.D. in Computational Neuroscience (UMass). As a scientist, Thea realized she was more interested in the stories behind the science than the data itself. She began studying writing with Terry Wolverton in Los Angeles in 1990, and has been writing and publishing ever since. She received a Master’s degree in writing from USC and has also studied at the Academy for New Musical Theatre and the Moving Art Playwrighting Lab. Thea's had over 50 poems published in journals and anthologies including The Southern California Anthology, Spillway, poeticdiversity, and numerous other journals. Thea was a semi-finalist in the 2014 Mary Ballard Poetry Chapbook Prize and also in the Atlanta Review International Poetry Competition. In 2001, Thea began exploring how to combine her scientific training with her love of language and she developed a new art form called contextual poetry. While seemingly new, the art form was used by Erasmus Darwin (1731-1802), the leading poet of his day and grandfather of Charles Darwin.
​
Thea's poetry ranges across topics from history to science to her family. After her visit to Eastern Europe, she began reflecting on the Holocaust. Her four trips to Greece have generated other poems that explore the birth of the patriarchy. Of course, they would have all been lost if she didn't jump into the Aegean Sea when her journal flew out of her grip as she was debarking from a cruise ship.
​
In 1998, Thea was selected for the slam team to represent Los Angeles at the National Poetry Slams. The team, consisting of Thea, Deborah Edler Brown, Jerry Quickley, and Poetri, made it through the quarterfinals, semi-finals, and all the way to the finals where 1200 people watched along with audiences from CNN. After a hard battle, LA came in 3rd place. "It was a phenomenal experience."

In 2009, Thea wrote the musical We Did It For You! Women's Journey Through History about how women got their rights in the United States. A volunteer cast of older women has brought the show to women's organizations, conventions, colleges, high schools, army bases, museums all throughout California. Thea now gives play-reading workshops nationally bringing this important message to high schools, colleges, and organizations. Thea has written 11 other plays, including her children's musical At Seven which was performed by the Toledo Repertory Company, and her Primed for Love which was seen at the Eclectic Company Theatre and in staged readings in various venues. Her one-woman show The Only Thing Greek About Me is my Name has been performed at the Santa Monica Playhouse and other theatres.

Thea is a sought after storyteller and performance poet and has performed at venues across the nation from California to Maine. She has been interviewed on numerous TV programs and was a featured poet in the documentary "GV6 THE ODYSSEY: Poets, Passion & Poetry."
​
Besides poetry and plays, Thea writes fiction. Her novel, The Swallow and the Nightingale, has been hailed as "a masterful blend of science-fiction, history, mythology." It draws the reader into a fable about 4,000-year-old secret brought through time by the birds, using today’s world of climate change as a backdrop to help awaken people. She reminds us that the visions of Gandhi, religious mysticism, and Native Americans are a more sustainable solution than the patriarchal system under which we live. Since writing The Swallow and the Nightingale, Thea has become an activist for environmental and social justice. She is on the leadership team of the Jewish Climate Action Network and chairs the Green Sanctuary Committee of the First Parish UU Church Medfield. A co-host of the "Talking Climate" cable TV series, Thea teaches "What's Your Carbon Footprint?" at various institutions. She studied climate change at Univ of British Columbia.

In 2015, along with her family, Thea was inducted into the International Educators Hall of Fame. While she uses her writing to educate while entertaining readers and audiences, Thea is also a teacher. She's been a college professor and adult education instructor. Since 2005, she has been teaching creative writing. Her favorite topic to teach is writing from the Deep Voice, a technique she learned from Los Angeles poet Jack Grapes.

Thea was a clown for 20 years. After she learned to juggle, Thea branched out into magic and performed at parties, parades, schools, libraries, and street corners. As Little Blue, she won many awards at clown conventions. She will still do magic tricks and juggling, but now as a poet and storyteller.

My parents taught us to contribute to society, be curious, and volunteer. My sister Penni has 46 years of ‘hiding learning in the fun’. My geologist/activist sister Norrie and artist sister Val are volunteers. I learned about my advantages (being white) and disadvantages (being a woman). We carry on our parents’ vision, which is why my whole family was inducted into the International Educators Hall of Fame in 2015. I’ve been drawn to the issues of inequality and learned about white (and male) privilege from Peggy McIntosh. My creative writing focuses on shifting from patriarchal thinking and it was Gandhi’s seven social sins that coalesced a direction for me. Until she died recently at 102 years, our mother always said, ‘Dwell on human kindness.’ That is the nightingale song we learned; that is the song I spread.

"At the end of an hour of the magic of Thea in her many worlds which she shares with such wit and wisdom, I felt almost as if I had been transmuted into another being so captivating, transforming, inspiring, brilliantly constructed, and affecting were the tales she told and sang. It was an experience I would like to share with everyone I love." 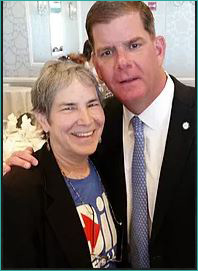